This document shows some of the statistics collected between July 2017 and September 2020, spanning more than 3 year of logs from the DBpedia web service operated by OpenLink Software at http://dbpedia.org/sparql/ .

The restrictions described above may impair some complex analytical queries. Users who frequently encounter these limits are advised to:

The following graph shows the average number of hits (or requests) per day that were made to the DBpedia service during each of the releases.

The following graph shows the average number of unique visits per day made to the DBpedia service during each of the datasets. 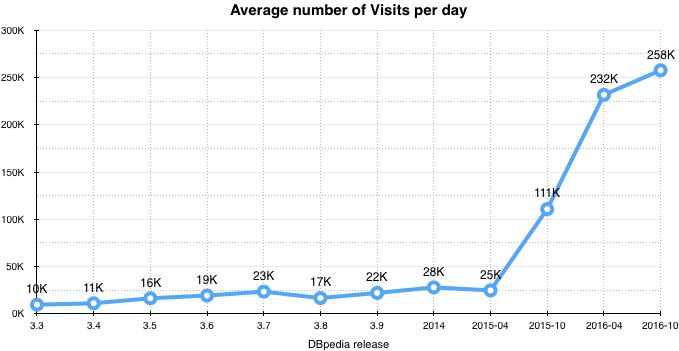 If we focus on the last 12 months, we can see a slightly lower average of 48.10%, as shown in the following graph:

This means that around 50% of traffic uses Linked Data constructions to view information available through DBpedia. To put this into perspective, that means that of the average of 7.2 million hits to the endpoint on a given day, 3.6 million hits are Linked Data Deployment hits.

The following table shows the information on visits, sited and hits for
each month between 7 July 2017 and 30 September 2020.

The following graph shows the average number of visits per day.

Since it is not possible to track individual IP addresses behind a NAT firewall, these figures should not be taken as absolute.