This document shows some of the statistics from the DBpedia 2020-12 Snapshot released collected between January 2021 and July 2021; spanning a half year of logs from the DBpedia web service operated by OpenLink Software at http://dbpedia.org/sparql/ .

To maintain equitable access to the DBpedia service for everyone, OpenLink limits connections by rate and concurrent connections, limiting disruption by faulty or misbehaving applications.

The restrictions described above may impair some complex analytical queries. Users who frequently encounter these limits are advised to use one of the following methods:

The following graph shows the average number of hits (or requests) per day that were made to the DBpedia service following each release.

The following graph shows the average number of unique visits per day made to the DBpedia service following each release. 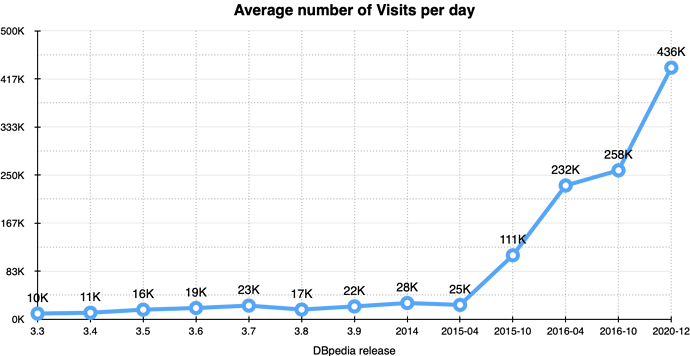 In this report we treat multiple hits (or requests) originating from the same Client IP Address within a 30 minutes (or less) interval between subsequent requests as a "Single Visit” by an “Active User Agent”.

Imagine DBpedia Entity Identifiers that fail to resolve? This is the single most important aspect of DBpedia and its pivotal role as a LOD Cloud kernel. If we focus the 2020-12 snapshot, we can see a slightly lower average of 35%, as shown in the following graph:

This means that around 65% of traffic uses Linked Data constructions to view information available through DBpedia. To put this into perspective, that means that of the average of 12 million hits to the endpoint on a given day, around 7.8 million hits are Linked Data Deployment hits.

The following table shows the information on visits, sites and hits for
each month between 8 January 2021 through to 22 July 2021.

The following graph shows the average number of hits (or requests) per day for the whole time period:

The following graph shows the average number of visits per day over the whole time period:

Dividing one by the other, we get average hits per visit: